Here's What's New in this release:


The rest of the detail can be found in the Release Notes: Here

If you missed what vSphere 6.0 Update 3 included here's the What's New from it:

The rest of the detail can be found in the Release Notes: Here

Please comment on adoption of these updates...
Posted by VMGuru1 at Sunday, March 26, 2017 No comments:

Well, not only has this week seen the belated by one month Patch Tuesday by Microsoft, VMware followed suit with two releases themselves...

You can use the link to see everything, but here's What's New:
This release of vCenter Server 6.5.0b delivers a number of bug fixes that have been documented in the Resolved Issues section.
Here's more detail on the Updates to the vSphere Sphere Client in VC 6.5b:

The online documentation for vSphere 6.5.0b is the best source for detailed documentation on what functionality is now available (http://pubs.vmware.com/Release_Notes/en/vsphere/65/vsphere-client-65-html5-functionality-support.html), but for comparison sake, the bits are just after Fling v3.2, plus a few minor things. The only notable addition beyond v3.2 is the “Accept License” page on OVF deploy, which we specifically pushed into this patch to enable OVF deploy.
This is the list of some of the additional functionality included. Note, some of these features are presented in a partially complete manner. For example, OVF deploy in 6.5.0b will only support URL deployment (no local file). The plan is to fill out all of these features, but the more feedback we get from you regarding what is most important will help us deliver faster.
Some of these flows may have had minor tweaks to make them easier to use and learn. If you have feedback about any of the new behavior, or missing portions of features, of course let us know using the integrated feedback tool by clicking on the smiley face in the upper righthand corner.

The following table lists the problems that have been fixed in this release of vSphere Data Protection:

Failed to deploy package: File ds:///vmfs/volumes/UUID/_deviceImage-0.iso was not found


While working on setup for a Custom version of our Exchange 2013/2016 Ultimate Bootcamp today, I came across a problem which is not new, but was new to me.

A colleague had saved some VMs to OVA format for deployment in a Master vApp.  As I went to deploy them, I received the following error message:

After doing some research, I came across a couple of articles.  Neither gave me what I needed, but through combining bits and experimenting, I found a solution.

The VMs had ISOs attached to their CD-ROMs when the were exported to OVA format.
The OVF file inside the OVA package has information about the attached ISO.


Another option would be to simply delete the MF file.  vSphere deployment of the OVF then wouldn't do a hash check at all and the install will complete as expected.  Your choice!
Posted by VMGuru1 at Friday, March 10, 2017 No comments:

Problem: For whatever reason, your install of, migration to or upgrade to VCSA 6.5 stops after completing Stage 1


While teaching class today, I had a student ask if they could restart their VCSA 6.5 installation after Stage 1.  I wasn't sure, so I did some research.

It turns out you can restart at Stage 2.

You will then be presented with the following screen.  Simply click on the appropriate choice to continue... 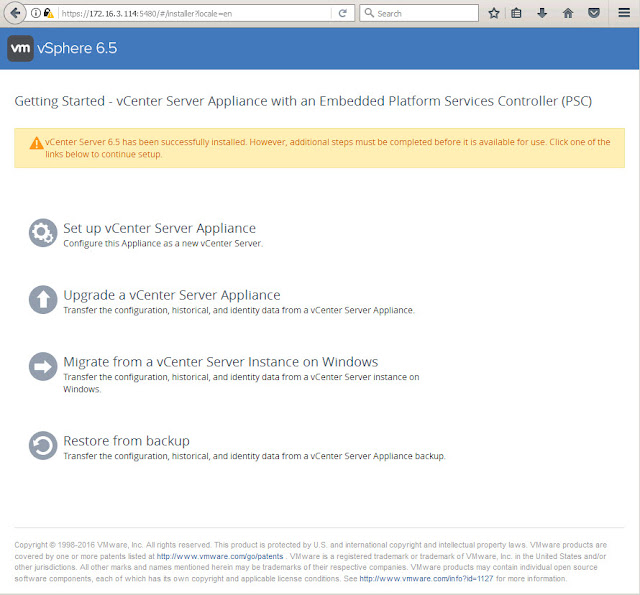 One reason a Stage 2 pre-upgrade check error may occur is if your source vCenter manages the cluster where you're deploying the new vCenter Server Appliance 6.5, you should specify an ESXi host on the following screen: 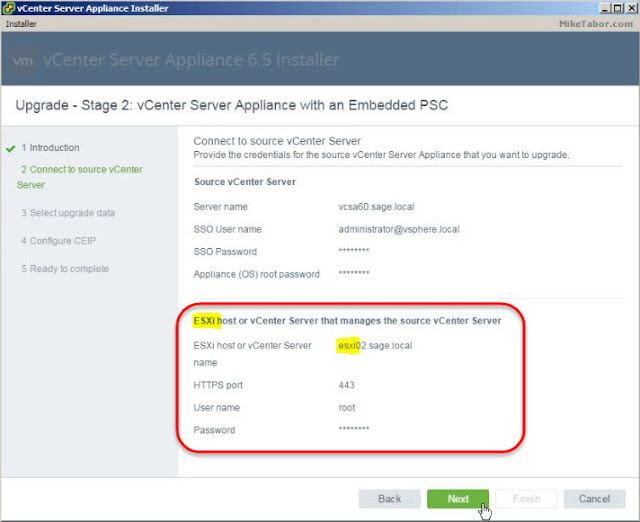